I earn so much that I can buy your life. ” The most fierce brawler of our time 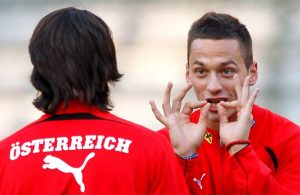 “Such a life. It’s just me, ”Marco Arnautovich said with a helpless gesture when he crashed a club car two days after receiving it. In “Twente” they understood what they were going for: in 2006 a great talent appeared in the team, but with an unstable mentality, a difficult character and a reputation as a bully.
The Austrian practically grew up on the street where his friends looted houses and shops, and then went to prison. Marco recalled that time like this: “We specifically looked at people in the eye to provoke fights, although I was not some kind of gangster and did not kill anyone.” Street education Arnautovich moved to football.
Even before moving to Holland, Marco roared in his native Vienna, where he replaced more than one team. Everywhere a player cursed with coaches and constantly violated discipline: “I was thrown out from everywhere. But I didn’t give a shit about what was going on. I wanted to give face to coaches who shouted at me. I did not care about anyone and did not listen to anyone but mom and dad. ” One of the children’s coaches offered the forward to go to the doctor: “He has an inferiority complex. He needs to turn to a psychologist. ”
Twente hoped to find a new Zlatan Ibrahimovic. The Austrian himself wanted to be like this: he called the Swede an idol, imitated him in everything, but he looked more like Ibra not with a game, but with scandalous antics. For example, he insulted an opponent on racist grounds right on the field. “I’m just a little boy against the background of Ibrahimovic,” Arnautovich says modestly.
A problem guy at 19 wanted to pick up Zenit, but he went on loan for Inter for Jose Mourinho for the season. Even the Portuguese quickly tired of the endless shoals of Marco: “He is a fantastic person, but he behaves worse than a child.”
Mourinho did not like that Arnautovich was friends with Balotelli and regularly spilled breakfasts and team meetings. “In Abu Dhabi we stayed in a huge hotel. I was settled on the 75th floor. I was waiting for the elevator. I was sorry and pressed the button, but he did not come. A catastrophe, ”recalls Arnautovich. Soon the situation repeated. “I thought he would kill me,” – that day Mourinho broke down and sent the Austrians to train separately from everyone.
Once Arnautovich surprised Mourinho nevertheless. Though by chance. Marco arrived at the Inter base early in the morning. In the parking lot – not a single car. “Ideal,” thought Arnautovich, delighted at the sudden punctuality. Seeing him so early, Mourinho, surrounded by his assistants, stood up, began to applaud, and laughed out loud. “You came to the gym five hours before it began. You are my man. I love you! ”- shouted Jose, took off his watch and handed it to the player. The gift is still kept in Arnautovich’s house. Inter did not want to bring up the Austrian further, and returned Twente. “A real catastrophe,” with such a description of Steve McLaren Arnautovich, Werder took the four-year contract. And it seems regretted. In Germany, Marco had a lot:
1) Arnautovich came to one of the first trainings in boots with the inscription “Champions League winner”. Only the victory of “Inter” Austrian had nothing to do: in the main European Cup, he did not play for a minute.
Showiness novice just did not like teammates. Once Marco “accidentally” broke his bike on the move. “It seems that today is not your day, friend,” laughed passing by Claudio Pizarro.
2) It came to fights. At the training session, Arnautovich, for some reason, fell out of the picture after a simple combat with Sokratis Papastatopoulos. The Greek tried to raise the Austrians. Arnautovich pushed him with his elbow and screamed. Sokratis could not stand it and clung to his throat.
3) He called the “Bremen” dump. From the leadership of the player flew a fine, to which he responded as follows: “Take this money and give it to your family.” Bremen fans for such antics came up with a football player nickname “Arrogantovich” (from the English “arrogant” – “arrogant”).
4) Constantly cursed with head coach Thomas Schaaf and refused to press his hand. For his behavior (for example, in anger he kicked the ball into a billboard in training) an Austrian wrung out or twice as much as the others ran around the field. Once a German replaced Marco too early, for which he received a wave of mate in Serbian. “You are an old goat!” Arnautovich was indignant.
5) As usual violated discipline. In April 2013, together with Eliro Elia, the day before the game with Bayer, Arnautovich returned to the base at three in the morning. On the way, the police stopped the players and ordered a speeding ticket. The players were not drunk, but before the end of the season the field no longer appeared.
Earlier, Marco had already slowed down for a quick ride, but he reacted to the penalty too inadequately: “I earn so much that I can buy your life!” Although then I apologized publicly and presented the police with tickets for the match between Austria and the national team.

Posted in among which, audio broadcast for, coaches offered, confused the terrible, cultural evenings, guy will not give, imitated him in everything
<a href="http://thisismyurl.com/downloads/easy-random-posts/" title="Easy Random Posts">Easy Random Posts</a>
penalty area deprived the points bring loud victories prove himself local deputy drove who had previously fans for such antics direction to the forest leading players unfolding of a hot supported basketball psychological discomfort situation has improved emerge more new life has begun imaginary friendship celebrate the victory each entrance could mark their whole team thousand spectators came other items flew from heroes in general like this order strong interest person who uses list of investors both spent several difficult times to support covered sites national team dense strike Fat single match tobacco is popular gym five hours was called to replace republic were which means that club eventually became only but I don’t get for example unnecessary thing for Hungary o real allies terrible problems towards everything