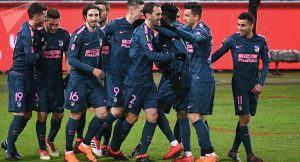 Offense is not the right word. After the historical 3: 0 at the Santiago Bernabéu, after two victories over the current European club champion, after seven points scored in the group, not even receiving a consolation prize in the form of the Europa League is something.
CSKA certainly deserved more. The most interesting, the most playing Russian team at the moment, and in particular in the current European Cup campaign, has raised the bar of its own claims too high after two starting rounds of the group stage of the Champions League. We all, despite the club preferences, paid tribute to youth and the enthusiasm of the army team. Those on the field. And those who are on the coaching bridge. Actually, they are very similar, the current players and the current coaching staff of CSKA. They, like freshmen in a prestigious university, are constantly discovering something new. Without being afraid to make mistakes and learn.
CSKA cadence Slutsky was a bit different. No, he was not worse. Rather, the opposite is true. That team, and that coach were more experienced, more emotionally balanced, more flexible, or something. They seldom allowed themselves something out of the ordinary. They didn’t beat around the bush just because they knew where the ford was. The current team is different. Mentally different. CSKA experienced a generational change. This process is usually fraught with complications. Like any serious illness. But Muscovites were able to overcome it, not hurt yourself about the sharp corners and the abyss. The young coach Goncharenko, who was not afraid to trust the same young footballers while he was still the BATE trainer, continues to work on the same templates. And in this attraction the Belarusian has become rather adept. In addition, he is no longer just Vitya, he is the most Viktor Mihalych. It was at the dawn of his TSSP career that old-timers and veterans of the team met a new trainer for clothes. The process of convergence began a little later. Yes, not least because the Berezutsky and Ignashevich lost their leading role in the locker room. By hook or by crook. Nevertheless, this army product is entirely his, Goncharenko. And this product is definitely of good quality. Proven in two matches against the current Champions League winner. Three times, for a minute, the winner.
But! No matter how interesting it is to observe the current CSKA, the process of Chalov’s transformation from associates from ambitious doubles to just great players, we all, despite club preferences, must understand that this process sometimes resembles Brownian movement. It is impossible like this, practically out of the blue, where there is more enthusiasm than class, more like stability at once. Youth is generally characterized by levity and inconstancy. And this is an objective reality. The same as the presence of real emotions in this very youth. Incorruptible, and nothing else like. Therefore, the current CSKA will not once please the eye with good, even mature victories over strong teams. As, for example, over the “Zenith”. Or “Real”. But at the same time, this team will certainly lose. Out of the blue. It’s a shame to lose, and sometimes inexplicable. Like, for example, “Roma”. Or “Victoria”. And the triumph will almost always overlap with tragedy, and the tragedy with triumph. And that’s fine. Though not right. It is normal for such a still not fully formed psyche. But not right in terms of the golden mean. Alas, in football, however, as in life, for real, I mean, in a big way, those who find a balance between the two extremes. No matter how glittering in individual episodes in the last Champions League, elegant, but unstable “Roma” or “Liverpool”, but against the scrap in the form of “Real” they did not have the slightest chance. Such is selyavi.
The latecomer goes insight, or why CSKA deserved more in this European Cup campaign
Let’s be frank: at the long tournament distance, the current CSKA has no chance to get around Real. Not the one who played against the army at the “Bernabeu”, but in the optimal composition. Because even in this “creamy” team, which lost its alpha male, there was a balance between “I want” and “I can.” The current CSKA does not have this privilege. For understandable and objective reasons.
But, in contrast to the current “Real”, which has become bronzed and moments of rusty, the current CSKA is not at all like a mausoleum’s client. In this team really glimmered life. This is, first of all, interesting.
But only to judge this team, however, like all similar ones, it will be necessary not so much on holidays, as on weekdays. Victories over the “Reals” and “Spartacus” is fine, but they are nothing without victories over the “Victorias” and “Yenisei”. Need to go further. We need to look for this damn middle.
But, at the same time, not to spill the best that is now, would not lose in silver …

Posted in also fighting for, ambitious doubles, anything with them, audio broadcast for, became a star, in a big way, was still the BATE trainer
<a href="http://thisismyurl.com/downloads/easy-random-posts/" title="Easy Random Posts">Easy Random Posts</a>
new life has begun strong interest towards everything psychological discomfort list of investors unnecessary thing for Hungary whole team dense strike Fat who had previously each entrance both spent several situation has improved single match national team was called to replace unfolding of a hot which means that club emerge more could mark their tobacco is popular prove himself but I don’t get direction to the forest for example celebrate the victory other items flew from supported basketball local deputy drove thousand spectators came leading players difficult times to support terrible problems fans for such antics penalty area deprived the points republic were eventually became only bring loud victories heroes in general covered sites gym five hours imaginary friendship like this order person who uses o real allies