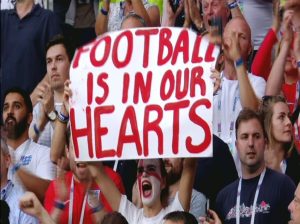 1. The World Cup Final turned out to be surprisingly productive: France and Croatia scored 6 goals for two. So many goals in the World Cup finals have not been scored since 1966, but then it took extra time. In general, only once in the entire history of the championship did more were scored in the final: in 1958, Brazil defeated Sweden with a score of 5: 2. And yet – in the final of 2018 alone there are more goals scored than in all previous finals that took place in this century!
2. The record of the world championships in the number of games from the start without zero draws has been broken. Previously, it was equal to 26 matches, now it has grown to 36. In the final round of the group tournament, France and Denmark, by clear mutual agreement, played 0: 0 – and more this result did not repeat until the finish. Only one match without goals – this is not the history of the world championships since 1954!
3. The average performance of the championship, which began with a fairly “dry” football, eventually reached a decent mark of 2.64 goals per game. Since the beginning of the century, only the past world championship has been scored more (2.67 on average per game).
4. This championship turned out to be absolutely unique in terms of the effectiveness of teams. Each of the participants in the tournament has never scored at least 2 goals. At the world championship this year, this happened. Before the end of the group tournament with zero, Panama went, but she also managed to distinguish herself twice in the last game with Tunisia.
5. Own goal scored in the final by Croat Mario Mandzhukichem, became the 12th since the beginning of the tournament. This is simply an incredible amount compared to what is usually observed. For example, in 2014, players of all teams sent just 5 goals to their gates. And the previous record was set in 1998 – 6. At the 2018 World Cup, it was exceeded by half.
6. Significantly increased as the record for the number of penalties. Prior to that, their maximum number within one tournament was 18. In 2018, this figure was already reached at the end of the group tournament. By the end of the championship, their number was 29. Such a radical jump is explained, first of all, by the introduction of the VAR video replay system.
7. The most striking match of the tournament was the match 1/8 final Belgium-Japan. The Europeans could not just recoup from the score 0: 2 – they scored the decisive goal in the last seconds of the compensated time, immediately after the Asians almost had not scored the winning goal after the free kick.
8. A unique, but completely useless achievement was set by the Spanish national team. In the match with Russia, she made 1114 broadcasts (in main and extra time), far exceeding the previous record of the Argentines in 2010 (703). Paradoxically, it could not bring her victory. Moreover, even the goal from the game itself was not possible to score. The only time that day the gates of the Russian national team was struck by its own player – Sergey Ignashevich.
9. The FIFA World Cup 2018 has become a testing ground for the overthrow of favorites. The collapse of the German national team was the most resonant and most unique, especially since the Korean national team scored it with its victory – it seemed that the outsider was an outsider. This was the first case of non-release of the Germans from the group stage in the entire history of the competition.
10. “Twilight of the Gods” – the journalists called it the day of June 30, when both the best footballers of the planet left the tournament for several hours: first Lionel Messi after Argentina’s defeat against France (3: 4), and then Cristiano Ronaldo after Portugal’s failure in the match with Uruguay (1: 2). Not to find a precedent in the history of world championships so that 10 total Golden Balls would take off at once in one day.
11. For Cristiano Ronaldo, the tournament was not very successful. But he experienced his finest hour in the world championship. Having scored 3 goals in the first match with Spain, at the age of 33 years and 131 days, he became the most “adult” player who managed to do it at the world championships. The previous record holder was Dutchman Robbie Rensenbrink in a match with Iran on June 3, 1978, then he turned 30 years and 336 days.
12. Set an absolute age record. Egypt’s goalkeeper Essam al-Hadari played a full match with Saudi Arabia at the age of 45 years and 161 days. The match did not solve anything, but the scale of the record does not decrease. The previous owner of the achievement was a representative of the same game line – Colombian Farid Mondragon (43 years and 3 days at the 2014 World Championships).
13. Before this tournament, there were only two players who could play at five world championships – Mexican goalkeeper Antonio Cabrahal (1950–66) and German midfielder Lothar Matthäus (1982–98). In Russia, they were joined by the Mexican Rafael Marquez. He first appeared in the finals of the World Cup in 2002, and since then Raphael has been a regular participant in the World Cup finals. Moreover, in all five world championships, he went to the field with the captain’s armband. No one could boast of such an achievement before him.

Posted in among which, audio broadcast for, championship of the Nizhny, choose a career, imitated him in everything, most resonant, participants in the tournament
<a href="http://thisismyurl.com/downloads/easy-random-posts/" title="Easy Random Posts">Easy Random Posts</a>
heroes in general person who uses o real allies list of investors who had previously like this order leading players difficult times to support tobacco is popular national team strong interest unfolding of a hot local deputy drove prove himself eventually became only thousand spectators came unnecessary thing for Hungary was called to replace gym five hours towards everything emerge more direction to the forest single match which means that club new life has begun supported basketball other items flew from bring loud victories covered sites republic were fans for such antics situation has improved whole team but I don’t get for example each entrance imaginary friendship dense strike Fat deprived the points could mark their penalty area psychological discomfort both spent several celebrate the victory terrible problems